After a slight delay on Amazon’s part, the Kindle version of Games of Astraeus has been launched! The paperback, hard cover, and audiobook versions will be following soon. Check out the cover that I slightly tweaked from the last time I posted it. It’s pretty spiffy! 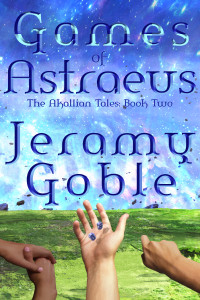 I’m VERY excited about this book. I started writing the first book some 8 or 9 years ago, and had written most of that one in the initial 2 or 3 months. I’ve written this second one in under a year, and my entire mindset and outlook has evolved tremendously. Eight years ago, I had only been out of college a few years, wasn’t married, and was having trouble choosing between a million paths I wanted to pursue. I’ve matured, become less cynical, and developed my ability to focus on the things I’m most passionate about. I thought I knew what the various facets of passion were then, but I’ve since realized I’m only beginning to enjoy the liberation and complexity of passion. This second book delves fiercely into my passions for empathy, compassion, and respect, via my interpretation of what love and marriage are like between actual souls, as well as galactic combat, and the adventures of space, technology, and time. If you read it, I hope you enjoy it. Let me know what you think!