Yeesss! It’s just about ready! Games of Astraeus releases July 2015! This book has been an absolute blast to write. It is full of so much multiversal wonder, action, intrigue, passion, and deception!

As with any series of books, films, whatever, there was a good bit of exposition and world-building I needed to take care of in Souls of Astraeus. I had a blast creating that exposition and background on the Astraean multiverse, (and I personally enjoy the minutiae of such things), but there’s a fine line between enjoyable exposition, and superfluous details. It was a rewarding challenge to work on understanding that fine line. 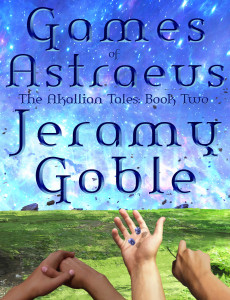 After the exposition and events of Souls of Astraeus, follows Games of Astraeus! It picks up right where the dramatic events of Souls left off. The bulk of the main characters from the first book, along with the other Astraeans as a whole, struggle to understand what has happened to them, and develop a plan to respond. Old bonds are strengthened, and new ones are formed, while the star-sprinkled abyss of the multiverse throws love, war, healing and destruction at the Astraeans.

In anticipation of Games of Astraeus launching next month, Souls of Astraeus will be $.99 for Kindle Sunday June 14th through the 21st!

« Illustrator Jonathan Powell
Games of Astraeus is out! »