I was very late boarding the Harry Potter train.  I never read the books and by the time I watched some of the movies, the series was already up to book 5 or 6.  I can’t remember.  My wife had read all the books and kept trying to turn me onto the franchise.  Well, that was three or four years ago now.  I’ve seen all the movies, and don’t like not being familiar with the books certain movies are based off of, so I’m about to start reading the books and I’m VERY excited. 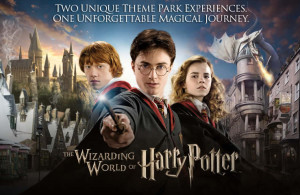 I’ve been meaning for a while to read them just to read them, but I especially want to read them, (or at least as many as I can), before my wife and I head to Universal Studios in September.  We’re going to check out Hogsmeade as well as the new area that opens in July, Diagon Alley.

We are RIDICULOUSLY excited!  Have any of you been to the Hogsmeade area yet?  How about the Harry Potter books… have you read them all?